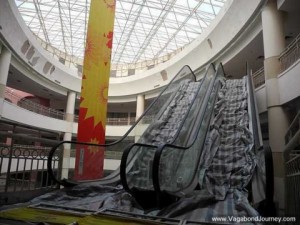 We have spent a great deal of class time discussing China’s development and transition from an agriculture to industry. Just this passed week class articles have focused on migration and what specific aspects “pull” or “push” rural citizens to move to major cities. It is no secret that China is experiencing a mass-exodus of migrants from rural villages to industrial cities. Chinese leaders anticipated this movement early and since the 1980s has been erecting cities rapidly to hold the millions that migrate each year.

In many ways China was prudent and meticulous in handling the migration. Large apartment complexes were designed to hold workers and cities were designed around the industry sector they supported. However, party leaders may have jumped the gun when they built the New South China Mall. In terms of retail space for lease, the New South China Mall is the largest mall in the world. It was built in the city of Dongguan in the Guangdong province. Now the mall is 99% abandoned and is another one of China’s rushed and ill-conceived development projects that sticks out like a sore thumb.

The mall is in a 170 km urban area deemed a megalopolis. Hong Kong and Shenzhen are immediately to the southeast of the mall, while Macau is to the south, and Guangzhou is to the west. Authorities built the mall to help bring in a new age of consumerism in China. Unfortunately, like many of the other development projects in China, the mall is abandoned and highlights some of the over-zealous development projects China jumped into.

I have attached a video of the mall below.