Nearly 27% of China’s land area is comprised of deserts. Thanks to a combination of exploitive agricultural practices, political mishaps, and changing patterns of migration, these deserts are expanding by nearly 10,000 km2 a year.  Desertification in China is particularly concerning because the entirety of China’s agricultural product comes from only 7% of its land area, much of which is located on the North China loess plateau directly threatened by land degradation. In addition, expanding deserts are now only several hundred kilometers away from large population centers, including Beijing. Much of China is already threated by regular summer sandstorms, blown east by strong continental high pressure systems. Desertification threatens to leave much of north 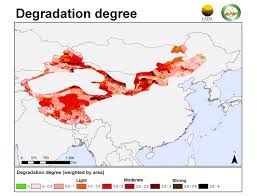 There are a number of causes for north China’s recent desertification trend. Most scientists draw attention to overgrazing of herds in semi-arid grasslands surrounding deserts, which can eliminate vegetation and leave grasslands vulnerable to wind and water driven erosion. In particular, limits on the mobility of tribespeople and their herds, imposed by both international and provincial borders and new ‘fenced ranchland’ initiatives, has contributed to severe localized overgrazing as herds spend all year on one small patch of grassland, leaving vegeatation no time to recover. In addition, overcultivation in regions only somewhat conducive to agriculture has reduced yields and led farmers to employ mechanized tilling methods and long-distance irrigation, which tear up soil and upset the natural balance in fragile ecosystems. Lastly, the government’s initiative to move large numbers of Han Chinese into predominantly minority borderlands like Xinjiang, Ningxia, and Inner Mongolia has led to large swaths of forest being cut down to open land for agriculture. Deforestation rapidly increases the rate of wind and water erosion, and many deforested plots can be farmed for only a few decades before they are retaken by the desert.

The Chinese government has attempted to combat desertification through two major initiatives: firstly, removing residents, usually ethnic minorities engaged in livestock herding, from vulnerable semi-arid border regions. Moving members of ethnic minorities, including the restive Muslim Uighurs, from their ancestral land and livelihood to urban or suburban centers has created serious unrest. Ethnic Mongolians, moved from their traditional lands in Inner Mongolia for fear of overgrazing, have increasingly protested the government’s decision as a way to control ethnic minorities and secure traditional lands for their own use. The Chinese government has also attempted to combat desertification by building a ‘great green wall’ of trees in a huge east-west belt running from central Xinyang to western Manchuria. This project, begun in the 1950’s, has had equivocal results at best, often resulting in village cadres receiving funds which never are actually used to plant trees. Lack of expertise also led government officials to plant huge numbers of water-hungry pine and 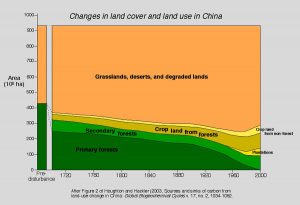 poplar trees in these vulnerable environments during the 1960’s and 70’s, contributing to the present rate of desertification.

The remoteness of many of the regions affected by desertification has allowed by the Communist Party and the Chinese public to ignore this issue for many years. However, as desertification increasingly threatens the fertile loess plateau and population centers of the Yellow River valley, the nation faces pressure to act quickly to save vulnerable lands. In addition, mounting ethnic tensions promise serious repercussions for continued inadequate policy responses to this pressing issue.

12 Responses to Desertification in China: Economic and Social Consequences