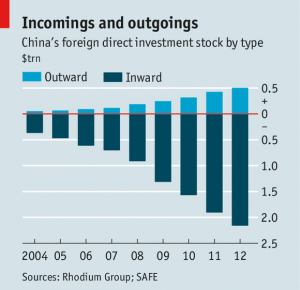 Just in the past few days, Chinese conglomerate Fosun International has agreed to pay $725 million for 1 Chase Manhattan Plaza, a skyscraper near Wall Street, which was commissioned by David Rockefeller and completed in 1961.  Also, a company called Greenland based out of China recently invested in a big development in Brooklyn, and Zhang Xin, a private property giant, recently invested in the General Motors building in Manhattan.

These recent foreign investments from Chinese companies is looking eerily similar to what the Japanese did in the 1980s.  In the late 1980’s, Japan’s economy was soaring, and Mitsubishi Estate Company bought the Rockefeller Center.  However, the Japanese company ended up selling at a massive loss after Japan’s asset bubble popped.

However, many believe that these investments made by the Chinese are much less likely to fail.  They negotiated to reasonable prices, did not overpay, and are getting a bargain on the price per square foot.  “China’s government is keen to boost the miserable yields it gets on its overseas investments,” argues Thilo Hanemann of Rhodium Group, a consultant.

Private companies seeking brands and technology have played large roles in this second wave.  However, while Chinese Overseas Direct investment (ODI) is growing very rapidly, it is still dwarfed by the foreign investment into China (see chart).  Similarly to Japan, China could still experience some kind of crash, but the shift in investment from state owned firms chasing resources to private ones chasing innovation and markets is a positive indicator.