» an extension for our next class: two sectors instead of one

→ in a dynamic context [cf. a spreadsheet, not done in class] growth peters out in less than a working lifetime of 40 years [see graph at bottom]

– indeed, in the long run all that matters is TFP growth

→ so would we expect China’s TFP growth to be low? high?

– see the handout: Cobb-Douglas, diminishing returns and all that [see basic graph below]

– so gY/L = gTFP + α (gK – gL): higher TFP growth and Kapital accumulation boost the rise of per capita output, while population growth substracts from it.

» if you have values for TFP, s, δ, and n pop growth you can use sY = δK at equilibrium to calculate an explicit relation.

– do a sample survey of businesses (and agriculture) for their capital stock. ask about age, purchase price, replacement cost and so on. not easy, but with a fairly modest budget and trained enumerators you can get an estimate.

– use the “perpetual inventory method” to do a quick estimate: count up new investment, which statistical agencies track (part of GDP calculations) and subtract off one year’s depreciation on the amount invested last year, two year’s depreciation for the previous year, and so on.

» I didn’t use this jargon in class

→ in other words, most stuff in China is pretty new! – and hence this crude estimate of the capital stock is pretty good, especially as you can disaggregate a bit because GDP statistics track residential investment, business structures, business equipment, car purchases and so on.

– it’s obvious but this is a “model” that deliberately simplifies things. once we have the core model we can go back and tweak it, as Edward Denison began doing in ? 1958, Dale Jorgenson about the same time 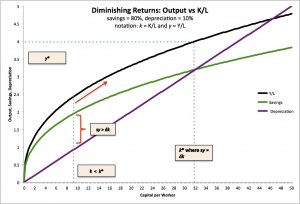 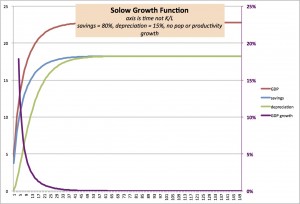