Oct 18 on Bloomberg, China’s Belt and Road Ambitions: China Is Forced to Reconsider Its Route Into Eastern Europe; 16+1 members disappointed as projects fail to materialize

China’s historical geopolitics kept it focused on Central Asia. Yes, in the late Ming Dynasty (16 century) Japanese pirates repeatedly plundered coastal areas. Then there were the British and the Japanese. Now there’s Trump, threatening who knows what. (He probably doesn’t!) But these latter threats washing ashore from the Pacific date back a scant 150 years, a mere moment in the sweep of Chinese thought on international relations.

…McMahon writ large: the BRI is too much money chasing too few projects…

So Pan-Asia remains a focus, if not THE focus, with the Belt-and-Road Initiative as the current flagship. (OK, the full name is 丝绸之路经济带和21世纪海上丝绸之路.) Xi Jiping – who is also Chairman of China’s Central Foreign Affairs Commission – formally launched the BRI in 2013, in visits to Kazakhstan and Indonesia. As that hints, one focus is the old silk road routes across Central Asia that eventually connect into Europe. Rail connections – and natural gas pipelines – can tie China to key resources and to markets that in the aggregate are bigger than the US, including but not limited to the Eurozone. Of course that’s also a region that fostered independent empires (the Mongols, the Persians) that controlled trade or even conquered China. And then there’s the Bear, sitting to the north of these countries, many of which were once part of the Soviet Union. The BRI promises to catch many birds with its net.

Central Asia is not the only focus. For bulk commodities ocean transport remains more efficient than rail. Think the Persian Gulf – we in the US buy very little oil from there, it’s in the wrong place however much it influences global energy prices. As a net importer of energy China is however dependent on the region. Those are long sea lanes, and defending them can be accomplished if South and Southeast Asia are brought into China’s fold. In contrast, if they’re hostile, even a beefed-up Chinese navy can do little against surface-to-surface missiles, or even low-tech pirates in fast boats. 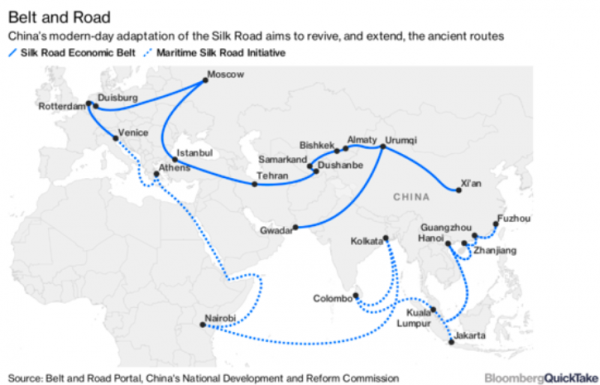 There’s lots of hot air revolving around the BRI. Take the above map, which I pulled from Bloomberg but which is all over Google Images. If you knew nothing of China, what city would you assume is the country’s capital? Hint: Xian hasn’t been China’s capital since 904!

All of these blend together. So think about Sri Lanka, building the first port of the new sea lanes, financed by borrowing from Chinese banks. How is that likely to perform? Well, until the other ports are expanded, and shipping capacity grows [more capacity in total] and shifts, you don’t get much revenue. Furthermore, as capacity is added, then … aren’t prices going to fall? After all, that’s part of China’s justification for the new routes, that they’ll lower costs! So will Sri Lanka be able to pay off the bonds? Fat chance! Instead the Chinese are the new ownersNote 1 of a shiny, fancy new port. The new owners will also likely lose money.

For that matter, should infrastructure projects make money? Doesn’t their value come from being used, and the more that operators try to make them generate revenue, the less value they will create? If the challenge is getting products from an inland town to a port, then high port fees undermine the project’s purpose! So I will make the claim that the BRI should not be structured to make money. These are fundamentally about generating positive externalities.

Finally, what IS the BRI?? It’s partly (mainly?) sloganeering, a catch-all phrase applied to fundamentally unrelated (sensible) projects and (nonsensical) boondoggles. We’ve seen this before.Note 2 It’s too much money chasing too few projects, McMahon write large and global. Go back to 1977 for another example: banks were awash with “petrodollars” following the first oil crisis because the OPEC countries couldn’t spend their new-found wealth fast enough. Brazil, and more generally South America, was the next big thing, a close-to-home Japanese-style growth miracle. And other than real estate, there wasn’t much in the US that appealed to banks.Note 3 Banks piled in – I know, the bank I worked for as all in. And no longer exists. Tokyo in 1988-91 is similar: with even a small piece of downtown land, you could get financing to erect a multifloor “pencil building” too small to include an elevator. Again, things did not end well. To reiterate, is the BRI in part McMahon writ on a global stage, a way to put some of China’s US$3 trillion in foreign exchange reserves to work and maybe – just maybe, how hard could it be? – earn a return higher US Treasuries?Note 4

Note 2: Well, I’ve seen this before – you don’t remember the Great Recession or [for those less parochial] the Global Financial Crisis of 2008-10.

Note 3: That was when Trump launched the Grand Hyatt and Trump Tower projects. Those projects ended well, but right around 1980 was when he initiated his first foray into Atlantic City, a series of disasters that had him one loan payment away from personal bankruptcy in 1990.