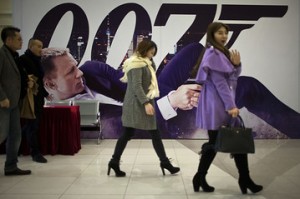 Despite China’s significant increases in modernization and westernization it is still very obvious that the government plays a prominent role in censoring the actions of the citizens. Recently the government cut scenes from the new James Bond “Skyfall”. The citizens were enraged which they mainly voiced through social media such as the Chinese equivalent of twitter, Sina Weibo.

“Rules on what is allowed for viewing in Chinese theaters aren’t clear, but censors typically cut sex scenes and portrayals of extreme violence. In addition, they prohibit subjects which may portray China in a negative light or touchy political issues that could spur social unrest.” For example, the scene where a Chinese character is shot by a French hitman did not make the cut for the Chinese “Skyfall:, neither did the scenes depicting prostitution or political issues. Currently China’s box office does not have a rating system out of fear of stifling box-office growth. However, it appears more likely that cutting out scenes will just incentivize citizens to get black market versions and avoid the theater. Foreign films account for 52% of the gross ticket revenue and in response the government has tried to foster a domestic growth by delaying foreign film releases, as well as censoring them.The film industry is calling to change the censorship rules to allow “topics such as public security, diplomacy and ethnic minorities” and I am very curious to see if their attempts will yield any success or if the government will fail to make changes. Source: WSJ.