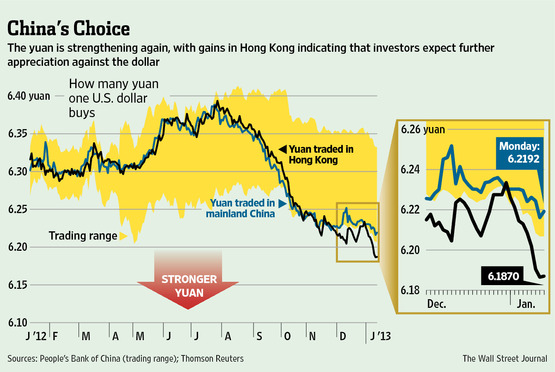 China’s central bank controls international exchange rates on the global market. On Monday the bank set a record daily rate of 6.2695 RMB/USD, the highest [target] rate since May 2nd.  With the RMB/USD rate allowed to fluctuate up to 1% during the trading day, intraday trading hit the highest level since the introduction of China’s modern currency exchange system in 1994. China is likely to continue strengthening of its currency to reduce import prices amidst inflation concerns; consumer prices rose 2.5% in December. Internationally, an appreciating yuan could attract more investors as it holds forth possible capital gains on asset prices. Additionally, it would improve political relations by reducing the country’s trade surplus, which the US and Europe argue gives exporters an advantage due.  While investors believe that any appreciation of the Yuan will be modest compared to gains in 2010 and 2011, many are bullish on the next 3-6 months. Source: WSJ