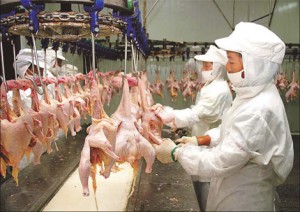 According to a report from Bloomberg, a new strain of bird flu has emerged in eastern China and it has killed afourth person. The virus,  H7N9 strain of the avian flu, has infected poultry workers in Shanghai and there are more cases suspected in the city. This can be a very dangerous thing for an area that is so densely populated where the virus can spread quickly. The article states that there is no current evidence of human to human contact, but it was detected in pigeon samples in Shanghai Square. This shows the the virus has spread outside of the poultry factories and has moved into an area where it can contact with more people.

The good news is that the certain pharmaceutical drugs have fought the virus in trials, but the fact remains that four people are already dead from the disease. This number is worrisome given the recent outbreaks of viruses such as the H1N1 strain that killed 284,500 people according to the United States CDC. The other bird flu strain has infected more than 600 people and killed 60 percent according to the article.

As of right now it seems that all anyone can do is wait and see if more cases arise. Given China’s immense and clustered population, I wouldn’t be surprised if more cases are reported shortly. The good news is that certain drugs have been showing signs of fighting the disease so hopefully we won’t see another global epidemic like in 2009.
Image from: http://www.china.org.cn/business/TradeDisputes/2010-07/29/content_20596979.htm