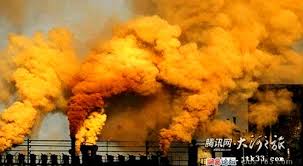 The article discusses the potential for a price on carbon being implemented in China. Relying heavily on the work and comments of Cao Jing—associate professor of economics at Tsinghua University—the piece conveys her confidence that China will implement emission cutting measures, but the slow crawl toward emission reduction may still be a few years off. In the meantime, the heavy concentrations of pollution will continue to cause negative health effects for millions of Chinese, as well as exacerbate the acid rain issue in some regions. For example, Cao mentions how acid rain is deteriorating houses in the City of Guizhou, which is heavily exposed to the steel, coal and chemical industries.

Considering the widespread issues caused from Chinese emissions, President Xi Jinping’s promise to combat pollution is not surprising, even if the initiative would foster an economic headwind. Further evidence of the Chinese government shifting toward consensus over the issue is that the 12th five-year plan (2011-2015) includes a reference to the introduction of an environmental protection tax. A reference is admittedly not concrete, but the addition represents a clear start. In Cao’s opinion, the earliest feasible, politically and economically, initiative will not be until 2015, yet all likelihood points to the following five-year plan.

For 2020, the State Council has set “a goal of reducing carbon-dioxide emissions per unit of gross domestic product by 40 to 45 percent from 2005 levels.” China already currently has seven cities participating in cap-and-trade programs. Further movements may be contingent on their effectiveness. Interestingly, Cao foresees China initially adopting a carbon tax, believing it to be more effective than the European’s cap-and-trade system. A surprising conclusion because a carbon tax has less direct control on emissions, whereas a cap-and-trade system theoretically guarantees a level of emissions and incentivizes the firms affected to reduce their marginal abatement costs through both reduced output and operational efficiency improvements.

2 Responses to Is a Price on Carbon Inevitable?