The article is another reiteration of the growing consensus between Chinese officials for a transition in the balance of the economy between net exports, investment, consumption, and government expenditures. The Chinese economy is poised to grow at the country’s slowest pace in approximately one quarter of a century—7.5% annualized—as tepid global demand is negatively impacting net exports. Moreover, the investment and credit growth that has been characteristic of the Chinese economic development over the past few decades continues to demonstrate increasingly material diminishing returns. Premier Li recently discussed finding the “golden balancing point.” This point is found between upgrading the economy to a more consumption, service-based post-industrial economy from that of an export and calculated governmental investment-driven economy. 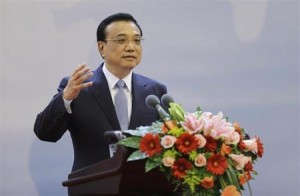 China will unambiguously face substantial headwinds throughout the process. Outlined in Tom Miller’s work, the rapid urbanization, expected to reach approximately 1 billion by 2030, can either realize what many investment strategists have been predicting or result in the majority of the country’s immigrants languishing in destitution. He writes that the large-scale urbanization will succeed if the “economy [moves] away from its reliance on investment and manufacturing towards greater consumption of goods and services…But if China’s leaders get urbanization wrong, the country could spend the next twenty years languishing in middle-income torpor” (8). This fine-line, although not clearly stated by Premier Li, is the general fear underlying the importance of his and the rest of the Chinese Communist Party’s emphasis on finding a “golden balance.” The next few five-year plans are going to be critical to development. How the CCP manages urbanization, the underlying mass-migration, and the facilitation of a more consumption-driven, developed economy, will shape the next two decades of China’s history.