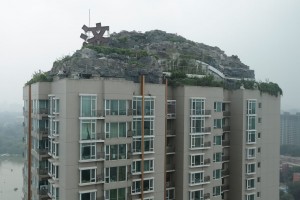 Zhang Biqing is a powerful Chinese healthcare magnate who has made millions through his medical clinics and acupuncture treatment therapy. Mr. Zhang spent six years and an estimated $4 million to construct this penthouse apartment. Until recently, his idyllic dwelling its atop at 26-story luxury apartment complex in Beijing.

Tenants of the building complained the noise of ongoing construction for six years was hard to live with. Additionally, Mr. Zhang is reported to have hosted large karaoke parties lasting late into the evenings. Mr. Zhang commented that when you have famous guests that want to sing, you are in no position to stop them.

The apartment, which is more a modern blend of steel and glass mixed with a synthetic rocky landscape, is completely illegal. Beijing officials made repeated attempts to enter the premises for zoning and code enforcement but were kept out by Mr. Zhang and his guards. One report indicates that a neighbor who went to complain to Mr. Zhang in person was beaten. This story is particularly interesting due to China’s issues with corruption and the disparity between the wealthy and poor as China continues to develop.

This story highlights the problem in an interesting manner. Mr. Zhang was a local delegate to the Chinese People’s Political Consultative Conference, an advisory body to the ruling Communist Party. This building turned into an egg on the face of the Communist Party as it was one of their own members using his wealth and power while disregarding the rules.

Mr. Zheng was originally unapologetic about his misdoings but has now switched his stance saying it was a huge mistake. It is important to note that the apartment itself was quite appealing looking and many people enjoyed how it shook up the skyline. Law enforcement has given Mr. Zheng 15 days to dismantle the penthouse.

3 Responses to The Demise of Zhang Biqing’s Penthouse