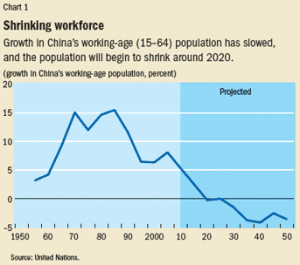 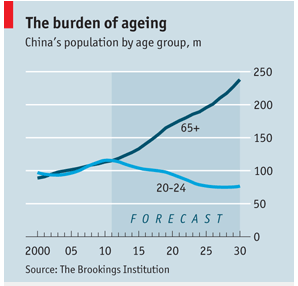 Since we talked about low fertility rate and labor shortage that China is likely to experience, I wanted to follow up with more details regarding China’s future of labor market.

Recent studies show that surplus labor from rural sector is no longer available that there is now a labor shortage. China is about to enter a serious demographic shift in a few years, driven by declining fertility and aging. Due to the enactment of “one-child policy” in 1979, China’s total fertility rate fell sharply from 6 births per woman in 1970 to 1.4 in 2010. The United Nations predict that China’s population will decrease from its current level to 1.1 billion by 2050 and the working population will decrease from one billion to 690 million. Shrinking Workforce chart provided by the UN indicates that the working age population will fall in less than a decade. The growth in the workforce has slowed and the population will begin to shrink in a few years.

The projected shrinking workforce can be explained by the problem of population aging (see chart on the burden of ageing). About 8.5% of the current population is over 65, and it will likely to rise to about 25% by 2050 (UN), whereas the population for 20-24 will fall due to the declining fertility rate. The problem can also be observed in chart 3, which shows that the core group of industrial workers (age 25-39) is shrinking while the non-working-age population is growing. These findings suggest that China is on its path to the labor-short economy.

11 Responses to More on Labor Shortage in China