Earlier in the year, we read Country Driving, fo 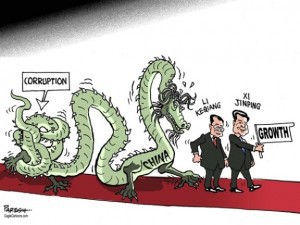 cusing on the challenges to China’s growing economy. Corruption within the country’s government stands out in Hessler’s writings as a major inhibitor to economic growth. Many government projects failed due to the lack of legal accountability for Chinese officials, resulting in diminished public trust and unnecessary economic costs. While many anti-corruption programs have been popularized during the past few decades, self-interest still prevails in the actions of many government leaders.

Similar to the many instances Hessler describes, the Chinese Communist party again failed to deliver on a highly promoted anti-corruption campaign. Why does corruption continue to dominant politics in China, despite these projects?

The answer lies in the Communist party’s supremacy over investigation and law. Today, the Central Commission for Discipline Inspection, a Communist Party agency, is responsible for the investigation and prosecution of Party leaders and officials. The internalization of these investigations have contributed to the lack of convictions and success of anti-corruption drives. Because corruption is embedded in the political culture of Communist China, investigations must be externalized from party-members in order for such projects to see actual results. Instead of utilizing anti-corruption campaigns, the Chinese Communist Party must establish a law system composed of external judiciary control from itself. This change will be difficult as Communist leaders do not wish to sway from their current system (in which they control the outcomes) and because China lacks the freedom of press and thought, necessary for providing knowledge of the wrongdoings of officials to the public.

This aligns with Patrick Barry’s recent blog post regarding internet censorship in China. The now infamous “Great Firewall” excludes the Chinese public from sharing free thought on social media and locks them 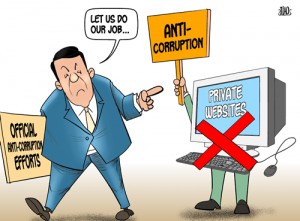 out from government operations. The access to information and freedom of expression are essential to maintaining a successful judiciary system that holds government officials responsible for their actions. Therefore, as Communist China manufactures more promises of anticorruption efforts, they simultaneously impose media restrictions which will only impede the success of the former.

3 Responses to Anti-Corruption in Communist China