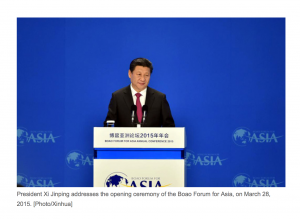 With the conclusion of last weeks Boao Forum for Asia (BFA), China appears to be renewing efforts at building trade networks. The proposals of the Silk Road Economic Belt and the 21st Maritime Silk Road illustrate that China wants to attract a new wave of foreign investment.

The Silk Road Economic Belt is a suggested system of trading hubs along the old geographic route of the same name. This network will serve as a pipeline for trade and interaction between the countries along it. The alliance will consist of countries from Asia, Europe, and Africa. The goals of the system are to increase bilateral trade and international transparency. China even hopes that the new policies can increase the total trade volume between China and the other countries to 2.5 trillion within a decade.

Many of the countries involved, such as Egypt, are very optimistic about the prospects of these initiatives. Officials from Egypt said that they hope the projects can draw more Chinese investments to the Suez Canal region.

On the other hand, China, as mentioned, intends to attract a new surge of foreign investment. Long Yongtu, the former Chinese deputy foreign trade minister believes that there will be mutual investment, creating growth and cultural exchange.

But there potentially is a geopolitical element. China believes that the United States is surrounding them with a web of alliances; therefore China extending a hand to its west could be seen as its own outreach in the race for territorial allies. Minority conflicts are also brought back to the forefront of discussion, as both Tibet and the Uyghur regions in the northwest are potentially involved.

In all, this is a beneficial project for all parties involved, and thus the region as a whole.