According to the Stockholm International Peace Institute (SIPRI), China overtook Germany, France, and the UK in exporting weapons between 2010 and 2014. The world’s second largest economy now accounts for about 5% of the world’s exports of arms, more than two third of which are attributed to Pakistan, Bangladesh, and Myanmar. The SIPRI study also found that China also had 18 African nations as clients during that five year period. In the five years leading up to 2014, China’s exports of major arms rose by 143% while Germany’s arms exports fell by 43% and France’s dropped by 27%, compared to a 16% increase in the volume of arms traded around the world. 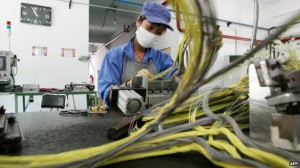 Despite China’s leap in the global rankings, there is still a large disparity between the top two exporters, the U.S. and Russia who accounted for 31% and 27% of the world’s weapons exported between 2010 and 2014, respectively. Exports from the two top producers also rose 23% and 37% respectively during that time period. The SIPRI compares arms sales over five year periods because of the large fluctuations in volume of arms traded year to year.