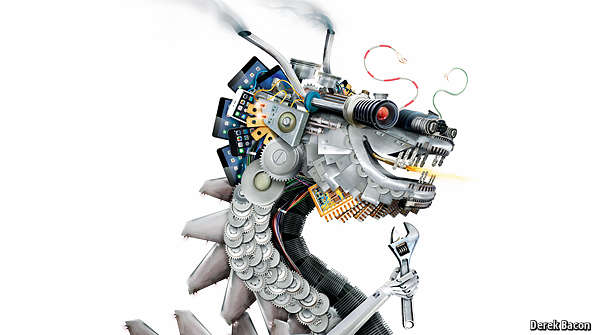 China has transformed itself and the world economy with their export-centric strategy, the country has increased their 3% share of global manufacturing output by value to almost 25%. Currently producing 80% of the world’s air-conditioners, 70% of our mobile phones and 60% of shoes, China’s rapidly expanding export monopoly has forged supply chains reaching deep into South-East Asia, this area (AKA “Factory Asia”) now makes half the world’s goods. Despite a flagging property market plagued by excess supply, rising debt, and the 7% growth goal, the lowest in almost two decades, China retains three advantages in manufacturing that will help keep their economy afloat: low-cost manufacturing, the reach of “Factory Asia,” and increasing domestic demand as spending increases and tastes become more sophisticated in China, Asian supply chains are strengthened and Factory China gains a larger share of higher-margin marketing and customer service. Due to these and other reasons, Factory Asia’s dominance in manufacturing will endure, making development and growth for emerging markets from India to Africa to South America much more difficult. Exports remain the surest path to success for emerging markets, and competing in global markets is the best way to boost productivity, but due to China’s disproportionate and unrelenting share of the manufacturing sector, emerging market countries will have to rely on not just manufacturing, but agriculture and services as well in order to drive development.