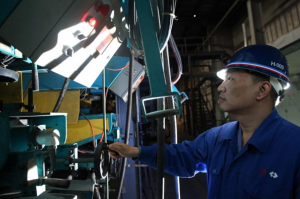 Chinese factories showed some improvement in March, seeing as the Purchasing Managers Index (PMI) increased from 49.9 to 50.1 according to the National Bureau of Statistics (NBS). The PMI is a general indication of whether a sector is growing or shrinking, with 50 being the midpoint. Over fifty is considered growing, below is slowing. Therefore, for the Chinese factory sector to shift from slow decline to marginal increase is a talking point amidst the economic slowdown.

China also recently implemented other measures to help spur the economy, including reducing the minimum down payment on second homes, as well as plans to increase construction investment and lower business taxes.

However some experts in Chnia believe that these recent gains are insignificant. Historically, the jump in the PMI around this time of year is always higher, seeing as it directly follows the return of workers from New Year festivities.

Furthermore, the NBS also released the PMI for the services sector. Although there was a slowdown from 53.9 to 53.7, it is still way ahead of the factories and manufacturing. However, this was attributed to weak employment, not the field itself. In fact, employment across many sectors is declining.

To top it off, a different report was released by HSBC and Markit that indicated the PMI was down from 50.7 to 49.6.

A number of issues are raised by this debate. One is the dependence many Chinese industries have on migrant workers. If there is annually a noticeable shift in the PMI when mass amounts of workers return home for the New Year, an institutional issue is clearly at play. It also calls Hukou into the light. If the factories that are so vital to China are dependent on migrants, why would they not be provided for?

Another problem highlighted is the unreliable data out of China. There is fault in the system when two very reputable groups come up with drastically different scenarios.

However, in the end, one part of the Chinese economy is not enough to predict a trend across the whole, however the uncertainty seen in this sector does not bode well for accurate measurements moving forward.

4 Responses to Chinese Factories Show Slight Improvements, but are they Enough?