China’s southeast Asian neighbors have long contested China’s claim over what China refers to as the South China Sea.  None contest this claim more boldly than the Philippines.  Manila’s confidence in the face of Chinese opposition is backed by two facts.  First, the Philippines has little to lose economically in terms of Chinese retaliation.  Second, the Philippines has support from the US military.  The 1.4-million-square-mile maritime region supports fisheries exploited by both nations, and holds an estimated 11 billion barrels of oil in subsurface reservoirs. 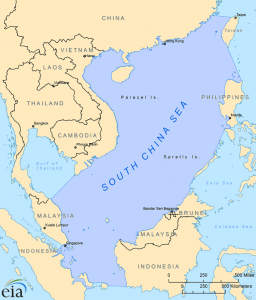