The coverage I’ve read focuses, implicitly or explicitly, on the RMB [yuan 元] / US$ rate, that is, the bilateral context. (An exception is the graph in the latest Economist article, The Devaluation of the Yuan: The Battle of Midpoint, 15 Aug 2015, 63). Their focus is however capital flows, which as I’ve blogged about before in “China’s Pending Depreciation” [at Autos and Economics on blogspot] and “Foreign Exchange Controls” [on this blog] will lead to a fall in the value of the yuan – exactly what’s happened. 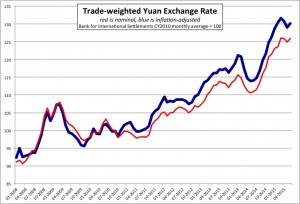 Let’s look at the data. First, the Bank for International Settlements calculates a trade-weighted exchange rate index for 68 countries, and also calculates an inflation-adjusted “real” exchange rate index. (China has had higher inflation that the US, for example, which over time works to appreciate China’s currency relative to the nominal dollar rate.) Since the onset of the financial crisis in September 2008 the yuan has risen by 27% in nominal terms, and [the blue line] 32% adjusting for inflation. That has made life significantly more difficult for would-be Chinese exporters, who in labor-intensive sectors such as shoes and garments have not been able to increase productivity. The result is a hollowing out of manufacturing in those areas, with jobs moving to Vietnam and Bangladesh.

Then there are the incendiary headlines, such as Jared Bernstein’s “Q&A’s on China’s big currency devaluation” at the Washington Post. I’m sorry, going from 元6.2/US$ to 元6.4/US$ is only a 3% change, and still leaves the yuan stronger than it was in September 2008. 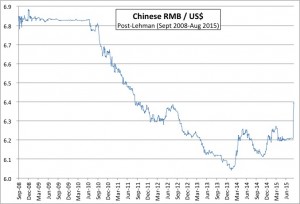 In contrast, over the last 12 months, relative to the US$ the Japanese yen has depreciated by 21.2%, the Euro by 20.6%, the Korean won by 16.3% and the Thai baht by 11.6%. Against that the Chinese yuan has only fallen by 4.3%. Relative to its major trading partners, the Chinese currency hasn’t fallen, it’s gotten stronger – and that includes the US if we go back before August 2011. Instead, we should really be viewing this as a dollar appreciation. Our short-term interest rates are poised to rise above zero; those elsewhere remain at or near zero. That makes US assets look attractive, and (tech stocks aside) our stock market also looks sensibly priced relative to (say) China. Thank goodness for China “fixing” its rate, despite $250 billion worth of outflows of “hot” money. Absent such “unfair” behavior, the yuan would surely have depreciated by far more.