The Chinese Wheat Trade was a topic readily researched during the late 1900’s, but has been rarely visited since the turn of the new century.  From the 1960’s through the late 1980’s China imported 9.3% of the worlds wheat exports.  This was necessary due to inefficiency within the agricultural system throughout the country.  Although, during the 1980’s, an increase in fertilizer use, seed variety, and overall agricultural efficiency, wheat yields rose 6% throughout the decade.  This led to a vast increase in per capita consumption for poor Chinese citizens.  The short burst in demand throughout the Chinese countryside was followed by China climbing close to 20% of the worlds wheat imports in the 1990’s.  These trends led to scholars believing the nation would continue to be a huge importer of wheat until they ultimately break even in 2020.  The scholars reasoning for this was related to the continued consumer demand, along with the government’s acknowledgement of their so called comparative advantage.  This comparative advantage is related to China’s vast rural population compared to land mass.  The large population provides them an advantage to produce fruits and vegetables that can be exported at a higher price than the import of wheat and grain.  Theoretically, this would allow China to focus more on producing fruits and exporting those, while still being able to cheaply import wheat and grains. 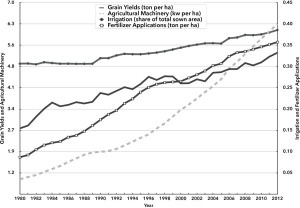 Scholars were fairly certain about there predictions of China’s wheat imports into the 2000’s, but data shows that they were incredibly wrong.   This tale somewhat confusing because some years China was a net wheat exporter, and some years the country was an importer as shown by this chart. 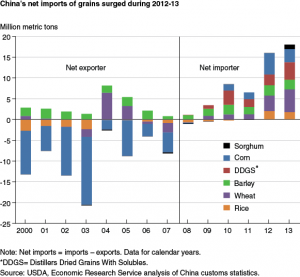 China bounced around trade neutral throughout the first 11 or so years of this century, but has skyrocketed as an importer in recent years.  This is due to multiple years of poor harvesting due to weather.  Although, with the Chinese government recently increasing the price it will pay for domestic wheat to stock in state reserves, many assume internal production is going to grow in coming years.  This may lead to China halting wheat imports from places like the US and Canada, furthering the trade deficit these countries already hold.  Agrimoney reports, “Currently, all the signs are pointing to China becoming wheat independent in the coming years, and many could argue they could become a significant exporter.”  With that being said I believe the major question that can be asked is how long will it take, and what will China be giving up (in opportunity cost) in pursuit of feeding its country essentially import-free?