On January 5th 2017, The Chinese National Energy Administration (NEA) announced a plan to spend more than 360 Billion dollars on solar and wind energy infrastructure through 2020. China’s involvement in renewables has been an ongoing endeavor over the past ten years; In fact, China’s production of photovoltaic cells has increased 100-fold since 2005. Because 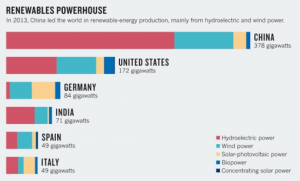 of their commitment to produce this renewable energy at such large quantities, they have achieved the Swanson Effect which says that as photovoltaic production doubles, its price drops by 20 percent.

China’s January 5th announcement is important for a few reasons. It will create more than 13 million jobs in the renewable energy sector, reduce the emissions of greenhouse gasses and clean the air in cities like Beijing which has been plagued by smog. Although China increased their efforts in renewable energy, they are still a large contributor to the global climate change crisis; China currently emits twice as many greenhouse gasses as the United States. Given the comparable sizes of the country, this is not a completely fair comparison, but it does show the magnitude of emissions produced by China. Because of this, China is now  rapidly increasing their efforts in clean energy. 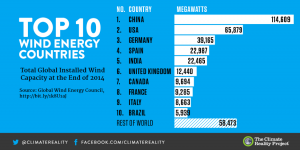 To contextualize the breadth of The NEA’s efforts, Greenpeace estimates that “that China installed an average of more than one wind turbine every hour of every day in 2015, and covered the equivalent of one soccer field every hour with solar panels.” In addition, China may meet its 2020 goal by 2018 given the rapid pace they are currently moving.

There is another story behind China’s renewable investment, and that is coal. According to analysts, China’s coal consumption peaked in 2014 and many believe that it will never return to these levels. At its peak, roughly 70% of China’s energy was derived from coal, though this is now declining. Currently, it is estimated that over 15% of China’s energy now comes from renewables and this percentage should increase to as much as 25% as the 2020 plan draws to completion. There is still much room to grow for China in the renewable space, but if their previous actions are any indication, there is no intention to slow down any time soon.