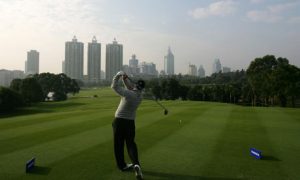 Golf in China is really expensive, a combination of the opulence and social status associated with playing the game.  Memberships in clubs in Beijing can run as as high as $150k for initial fees, and membership to clubs are often presented as gifts among the elites.  In most countries, a multitude of world-class golf courses would be regarded as an obvious and inevitable by-product of rapid growth and soaring living standards.  However, despite the sports’ popularity, there is a public, negative connotation that playing golf is exclusive only to the country’s wealth elite.  These individuals include government officials and rich businessmen, alike.  Despite the initial 2004 ban on construction of golf courses to preserve dwindling farmland, save water, and reduce the huge number of villagers thrown of their land, golf courses have nearly tripled from 170 in 2004 to nearly 600 as of 2011.  More than 100 golf courses in the last 5 years have been shut down by the government, yet the sport still endures culturally with the wealthy elite.  Xi Jinping’s anti corruption campaign, which serves as a vehicle to promote less extravagant lifestyles, targets mainly these government officials who as public figures of the state indulge in excessive wealth.  Many in China are angered by these high living officials where sharp divisions of wealth exist, yet even the central governments’ actions shows the relative, social ineffectiveness of this crackdown.

This crackdown has largely failed because local governments have encouraged the building of clubs to boost tourism and increase development opportunities.  As long as developers are well connected they can ignore warnings from regulators, who will rarely risk their careers by “enforcing laws that could offend powerful interest groups higher up in the food chain” (Financial Times).  This is a problem that China deals with as refuted by Professor Smitka, who states that the local governments’ inefficiency in generating local, public finance gives them incentives to pursue ventures such as building golf courses.  tThe continued popularity of golf suggests the inability of the central government to force its golf course ban, perhaps a reflection of other policies they might try to implement as well.

In regards to these membership gifts mentioned earlier,  there still has been some short term damages in golf membership prices for individuals who own the rights to sell their memberships.  In short, a speculative bubble for these membership appeared from 2004 until the recent government crackdowns.  Memberships were seen as a lucrative asset, and many elite purchased these memberships as if it were stocks.  Membership fees, in that regard, have been affected from an economic standpoint (though it does not affect the entire general public).  It remains to be seen how much value can come back to these golf memberships in the next few years, as their fees are now much lower as means to attract more individuals.  And maybe it is a good thing that these prices have shimmered down.