Things may be looking up for the Chinese economy. China’s growth levels increased to 7.8% in the third quarter, easing fears of a slowdown for the world’s second largest economy. Causes may be government stimulus and increase in new lending. 7.8% tops the Chinese growth target, which hasn’t missed since 1998. However, the targets may have been kept superficially low to avoid the image of a brewing crisis. Additionally, new plans for the country’s economic focus could damage this record of hitting targets. According to the Wall Street Journal, China is looking to shift to a greater dependence on domestic production and lean away from reliance on exports and investments in infrastructure, etc. In the short-term, this could lower growth rates. 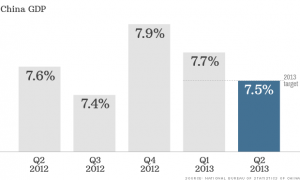