Chinese rice production is expected to be down this year for the first time since 2003. The Wall Street Journal reports that as industry and urban areas take up more land and rice production moves to less productive northern land, yields are falling. This  year yields are expected to be down 1.7% to 6.7 tons per hectare. While yields are tremendously higher than they were in Qin village during decollectivization, this stagnation is changing the dynamics of global rice markets. China, the largest consumer and producer of rice in the world, is increasingly reliant on rice imports. Furthermore, as rice exported from Vietnam or Thailand is often 10% cheaper than the cheapest Chinese grown rice and is free of many food safety / logistical issues plaguing Chinese producers, domestically produced rice is less attractive for purchase. The prevalence of imports is expected to grow. 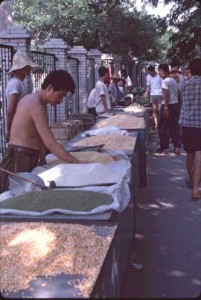 China values the stability of food imports and has diversified suppliers very widely. Fortunately, the yields of other grains, corn and wheat, are expected to be up helping to alleviate the overall affect. China imported 2.3 million tons last year, and has set a ceiling on rice imports at 5.32 million tons. While it is unlikely that this supply ceiling will be tested soon, there could be a situation forcing prices up dramatically if domestic production collapsed.

The good news is that Chinese scientists have developed a rice strain capable of producing 100% more rice, 13.5 tons, per hectare. However, as this type is expensive, its use is not widespread. A diversity of sources may actually protect the stability of China’s food supply, diversifying away from key regions that could undergo a drought or some other weather event or natural disaster devastating production.