China is building its fifth research station on the Antarctic continent at Terra Nova Bay in the resource-rich Ross Sea. Over the last twenty years, China has increased annual spending in the Antarctic  to $55m from $20m.

The most recent Chinese expedition, which left Shanghai with a 256 member team including construction workers is the country’s 30th Antarctic expedition. The expedition crew travels aboard the Xuelong, a $5m Ukrainian-made icebreaker. Their duties will be to restock Chinese research stations, finish Taishan (the country’s fourth station) and choose the site for the Terra Nova Bay station.
Countries have been using research stations as a way of staking claim to bits of Antarctica, which is a continent that has frequent sovereignty disputes. Having five stations will put China at only one fewer than the United States, which has the most with six.
The Antarctic is a vast unexploited continent, with fossil fuel reserves and mineral deposits, however their extent is unknown, and the Protocol on Environmental Protention upholds a mining ban until 2048. That ban may not hold up, however, and how countries position themselves for the inevitable exploitation of the Antarctic’s resources could prove decisive. 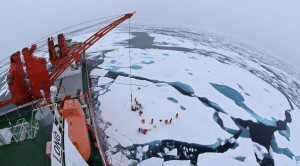 2 Responses to China in the Antarctic