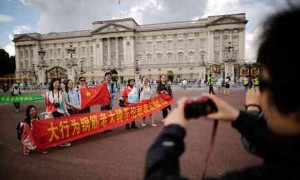 On October 1, 2013, the Chinese government attempted to implement a new set of regulations to curb corruption in domestic travel and ease the burden on tourists in China.

The combination of rising incomes, a less restrictive passport regime, and softer spending limits has caused the number of Chinese traveling at leisure to grow tremendously over the past few years.  The new law’s aim is to prevent practices such as the forced-march shopping excursions often led by underpaid tour guides.

One section of the new regulations advises Chinese tourists to behave themselves wherever they go in the world.  This comes after recent incidents that have caused embarrassment for Chinese teens.  For example, one carved the mark “Ding Jinhao was here” into an ancient wall in the Egyptian ruins earlier this year.  Other incidents include posting pictures online of hunting and eating endangered sea clams, and creating fake marriage papers to get free dinners in Maldives.  Overall poor etiquette around the world has created a bad reputation for Chinese tourists across the world.

Fortunately, this kind of negative publicity can actually have an impact on Chinese tourists, as they have a profound respect for their culture and do not want to damage their reputation.  There are many hopeful voices in China’s travel elite as well.

Zhang Guangrui, who studies China’s tourism industry at the Chinese Academy of Social Sciences, believes that the extra scrutiny will help rein in tourists quickly, and the new regulations will help expedite this process.

“The heavy media reports about the issue, criticism and discussion online about the problems just show Chinese people’s increasing awareness about it,” says Mr. Zhang. “The new tourism law points out the problem and reaffirms the principle, as a way to further remind Chinese people to pay attention to their behaviors when they travel.”