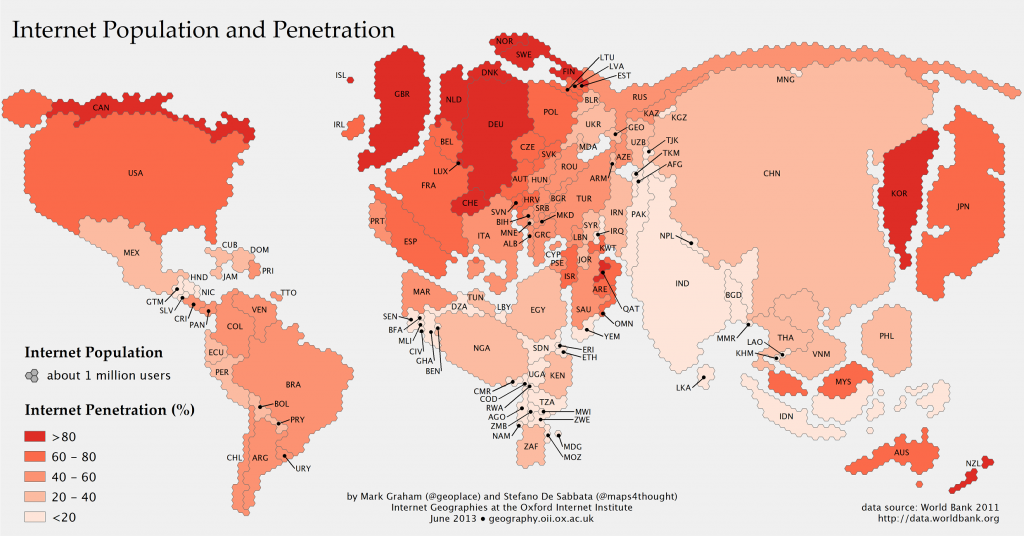 Continuing on my blogs about China and the internet  I wanted to share this map illustrating what percentage of the population uses the internet in each country around the world. The study was carried out by the Oxford Internet Institute using data on a country’s internet users and population from the World Bank. Countries like Great Britain, Canada, Germany, Norway, Sweden, Finland and Korea all boast internet penetration above 80%. The United States, which has a considerably larger population than those countries, lies somewhere between 60% and 80% internet penetration.

Then we get to China, which has a total internet penetration between 20% and 40%. This is not surprising as China is still developing and has a large rural population that still live off the land. I think it is important to note that China is doing better than its neighbor India, another heavily populated developing country. In my last blog post I wrote about light bulbs developed in Shanghai that provide wireless internet through light waves. Advancements like this could help China gain larger internet penetration and become an incredibly large portion of internet users. I think it should also be noted that while China’s internet penetration is only somewhere between 20% and 40% that still means it has the largest internet population.

It will be interesting to see how the Chinese government plans to increase internet access. I would assume that as they continue to develop cities and push for people to leave villages for the cities that they come up with creative ways to increase their internet penetration.