With all our discussion of the importance of Chinese culture, the arts should certainly play a role.

The late Chinese-French painter Zao Wuo-ki’s piece titled “Abstraction” went up for auction last Sunday through Sotheby’s. The work is from the artist’s “Oracle Bone” period. The final sale price, including the art house’s commission, was about $14.6 million, or 89 million renminbi. The proud new owner is Zhang Xiaojun from the Shanxi Province, an art collector. Wuo-ki passed away last April at the age of 92. 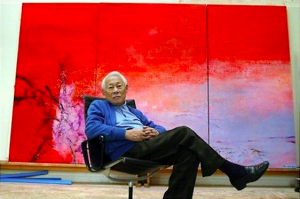 And here comes something else we’ve discussed this term: a joint-venture.

This work was a part of Sotheby’s first full action in Beijing since the formation of a joint venture with Chinese company Beijing, Gehua Cultural Development Group. Bidders from many different countries were participating in the auction, both in person and over the phone. Total sales for the auction at the China World Hotel were $37 million, making it a very successful first endeavor.

One reason there had been issues with successful art auctioning in China in the past was high import duties. In this instance, the international works were tagged with microchips so they could be tracked and released upon purchase. This way, the Chinese government didn’t have to pay for the import of the pieces before even being able to auction them.