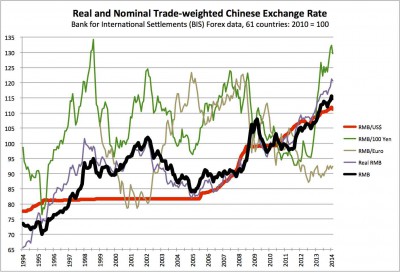 The recent depreciation of China’s exchange rate with the US$, to which it is pegged, garnered headlines. Until now those watching China believed that the RMB could only appreciate, leading to heightened foreign demand for Chinese assets by foreign speculators. Allowing a modest depreciation and increasing the intradaily trading band from 1% to 2% should discourage those expecting to make a quick buck by buying RMB today and selling tomorrow.

But how has the value of the RMB changed from a Chinese rather than a US perspective? China trades with the rest of the world and not just the US – Europe and Japan are major export markets and major sources of imports of luxury cars, machinery, semiconductors and other products – so the value of the RMB versus the Euro and the Japanese Yen also matters. Hence the concept of a trade-weighted exchange rate, conveniently provided in MS Excel format by the Bank for International Settlements in Basle, Switzerland. My graph presents their “effective exchange rate” calculation, to which I have added the bilateral RMB/US$, RMB/Euro and RMB/Yen rates, all indexed at 100 = average CY2010 value. Oh, and a higher value means a stronger RMB, and appreciation of its value, making it harder for firms in China to export and more attractive for them to import.

Because these other currencies move against the US$, there are periods when the RMB has appreciated or depreciated from the perspective of Chinese exporters and importers, even though the exchange rate was constant against the US$.

One Response to Think globally: the US isn’t China’s only trading partner