In 2014, China took the edge over the US in foreign direct investment, a feat that no country has been able to achieve since the US took hold in 2003.  Looking at th 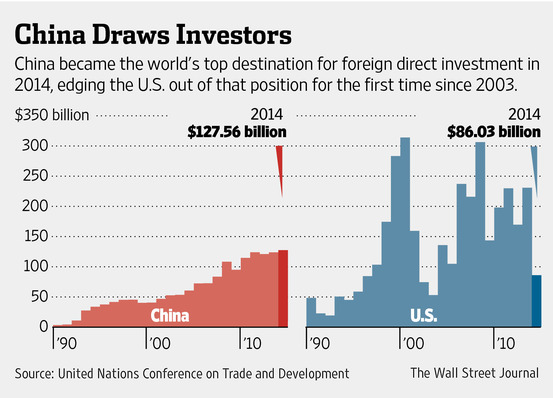 e charts, we can tell that China has had a relatively steady increase over the past twenty years and shows stability. Whereas looking at the US chart, it is very easy to see that there is much more volatility and drastic changes from year to year on how much money is invested in the country.

The article goes on to explain that this is partially due to a “long-term trend in foreign investment away from developed and toward developing economies.” Even with this fact the US still remained in the top five recipients of foreign investment, wherein which it was the only developed economy.

James Zhan, director for investment and enterprise at Unctad, explains the increase in China by reasoning that its economy “has been steady with modest growth over the past few years, and it is expected to continue.” Zhan also points to the fact that “there have been structural changes in inflows to China, from manufacturing toward services, and from labor-intensive to tech-intensive.” These as well as other factors have caused China’s economy to grow to the second largest in the world.