Lishui, located in the Zhejiang province, houses 2.5 million citizens. Within the province, Lishui ranks first in the natural resources: timber, waterpower, mineral deposits and wilderness. However, more recently, Lishui’s economy has been characterized by rapid industrial development. The main industries include wood and bamboo production, textiles, pharmaceuticals, like herb medicines, and electronic machinery. The commercialization of bamboo and natural products contributes to the development of a comprehensive agricultural program. Their economy thrives on the production of 180 brand name products, which are sold both domestically and exported to over 100 foreign countries. 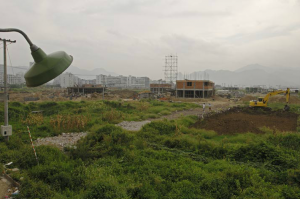 In 2010, Lishui’s foreign trade equaled 1.5 billion U.S. dollars, which represented a 38% from 2009. Thus, demonstrating the rapid and increasing influence of cheap exports on the city’s economy. However, with this increasing industrialization, many people may be out of work. As a country, China announced that 5 to 6 million workers will be laid off in the coming years to “curb industrial overcapacity and pollution” (HKFP). Thus, it is worth questioning whether the movement towards an industrial manufacturing economy will displace workers in Lishui. In addition, Lishui is filled with beautiful landscapes and scenic attractions. However, we can infer from its isolated location that the city attracts more Chinese than foreign tourists.