According to New York State Department of Health, PM 2.5 are tiny particles in the air that reduce visibility and cause the air to appear hazy when levels are elevated. It is believed to post the greatest health risks, which includes “respiratory and cardiovascular morbidity from lung cancer, such as aggravation of asthma, respiratory symptoms”. The sources are motor vehicles, power plants, wood burning, and certain industrial processes. In Beijing, from 2008 to 2015, 49% of the days were considered as unhealthy to go out. 4% was considered hazardous.

However, not many people in China really knew about the danger of it even though people in big cities live with it until a CCTV journalist Chai Jing released the documentary “Under the Dome” to the public online, talking about how serious the issue is in China. Just the first day it came out, the film had more than 150 million viewers. One thing Chai did at the end of the film was to call out for actions. She wants Chinese citizens to “stand up” whenever they see violations of environmental laws and demand changes. Considering the great effect and panic it caused to the public, in three weeks, the documentary was censored and blocked by the Chinese government. 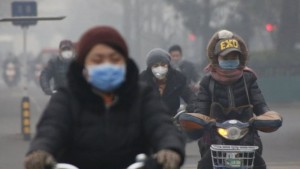 It is true that Chinese government has been doing things to solve the problem, such as shutting down some steel firms. However, it is clear that stopping these pollutant sources is also slowing down the Chinese economy.

5 Responses to PM2.5 and Public Health