It is not hard to understand how China, with its massive, young, and tech savvy population, buys more iPhones and smartphones than any other nation on earth. The Chinese also make almost all of them. There’s a clichéd animosity toward the “Made in China” phenomenon here in the states, for many reasons: The loss of American jobs to overseas labor (an inevitable result of globalization), the large trade imbalance between the U.S. and Asia, and the notion that large companies like Apple subject their Chinese workers to harsh and inhumane working conditions. Donald Trump made headlines 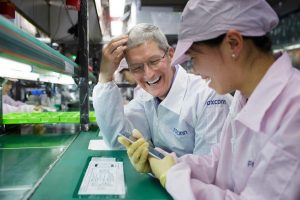 with another characteristic threat towards Apple’s Tim Cook, not-so-subtly suggesting that Apple should start making their products in the states (or else).

However, when one looks at the dynamics of comparative advantage and industry in China, this is truly a ridiculous concept for Donald to worry himself about. It’s also borderline insane to expect Apple to simply move their entire production line to the states based on the threat of a tariff. The perception of this Trump ideology is that Apple is screwing over the American worker in search of more cash. Indeed, it is far cheaper to produce iPhones in China ($65 cheaper to be exact) than in the U.S. It’s also extremely important to consider Apple’s supply chain for the iPhone. Almost every single part is produced in Asia, with the exception of most semiconductors, which are produced in Europe. If one wanted the iPhone to be “made in America,” not only would Apple have to open a factory here, but so would every single one of its suppliers.

It’s also important to recognize that the quality of Chinese factories and production lines are far better than any in the United States. We “can’t compete” with the supply chains that are in place there. Executives say that there are literally not enough technically skilled Americans who would want to do the job.

One of the main criticisms lobbed against Apple is their hiring practices overseas and working conditions in the factories. Very low pay and long hours are the main complaints, and Apple has spent ample resources to try and shake this perception with little success. However, there are many positives when an Apple plant comes to town. Not only does a factory hire tens of thousands of workers (an absolutely massive injection into the local economy, low wages aside), but it improves the relations between locals and their governments. Officials actively seek to make their town the home of the next hardware factory, and offer millions of dollars in money upfront to build them. In Zhengzhou, affectionately known as “iPhone City,” they produce 500,000 iPhones every single day. The local government is reported to give significant tax breaks and subsidies to Foxconn, one of Apple’s manufacturers, to keep the jobs there.

I don’t think Apple wants to go anywhere soon. It seems that Chinese workers, the Chinese government, and the American consumer, all agree.