China’s economy has developed rapidly since its evolution from a planned economy, but only recently have consumers built up enough trust in the system to deviate from face-to-face cash transactions that they have relied on for decades. Using credit as a means to purchase goods is a relatively new concept to the Chinese, but its quick adoption has resulted in several benefits, but also unforeseen consequences.

Researchers at the University of Missouri found that credit card adoption in China grew 40% between 2004 and 2009. Despite this astronomic growth, only 30% of urban Chinese households had atleast one credit card in 2012. While the Chinese are realizing the convenience of having a credit card, the government is also encou

raging individuals to develop credit histories. In 2015, the government awarded eight companies consumer credit rating licenses in an attempt to develop this new segment of the economy. One such rating agency, Sesame Credit, which is run by Alibaba, offers perks to those who have high credit scores, further incentivizing the use of credit.

Access to credit has dramatically increased consumption in China, especially with the rise of online-retail. Alibaba, who has developed its own virtual credit card, sees a 50% increase in spending from consumers who spend less than 1,000 yuan ($145) online
a month after they receive the card. While these increased consumption patterns bode well for the Chinese economy, there are also unforeseen consequences. 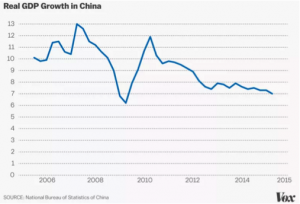 In the first quarter of 2015, Chinese consumers’ credit card debt hit a record high of ~$411 billion, up 35.49% from the first quarter 2014. In tandem with a slowing economy, this figure represented 18.1% of China’s first quarter GDP, compared to 3.8% in the United States. As the use of credit continues to rise, and the economy continues to slow, Chinese regulatory authorities will be forced to implement measures that protect from a potentially catastrophic credit crunch.

Here are U.S. Data for comparison by The Prof

13 Responses to The Rise of China’s Credit-Driven Economy