Much recent literature on US-China trade relations has focused on the possibility of a trade war between the countries with the two largest GDPs in the world. New US President Donald Trump has consistently accused the Chinese of manipulating their currency, which is an outdated claim. Most conservative estimates suggest that China has spent over $1 trillion in foreign reserves to bolster the value of the renminbi. As part of his campaign rhetoric, Trump threatened a 45% tariff on all Chinese imports if the Chinese did not end this “currency manipulation.”

But what would be the Chinese response to such an imposition? Luckily, we have some insight into what such a tariff would look like. In 2009, shortly after taking office, President Barack Obama imposed a 35% tariff on Chinese tires. In response, the Chinese took a case against the US to the World Trade Organization, to no avail. Thus, China took steps to impose tariffs on several US products, leaving both countries with losses as a result. If President Trump were to impose an even higher tariff on all Chinese goods, the results could be disastrous for both countries. Chinese exports to the US have been steadily increasing, and Chinese officials see no cause for concern over the potentiality of a tariff, since the US market only accounts for about 18% of their exports. Officials say that if a trade war were to occur, US companies like Apple, which rely on inputs made more cheaply in China, would suffer much more than Chinese companies would. While the Chinese could simply replace Boeing orders with Airbus, auto and iPhone sales in the US would suffer a huge setback.

The large (and growing) trade deficit between the US and China is indicative of an unbalanced flow of goods between the two countries. Further, while Chinese exports to the US account for 18% of their total exports, Chinese goods account for 22% of all imports. A trade war would be detrimental to hundreds of US firms which rely on imports of inputs to their production processes. As 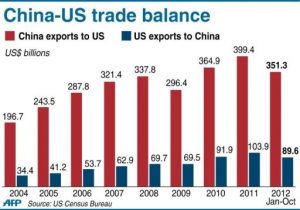 we know from economic theory, increasing the cost of inputs to a production function decreases the quantity of those inputs, and thus decreases the total output a firm can produce. This would dramatically affect many companies, like Apple, which have huge fixed costs associated with the production of their product. In the long run, although the US might see some tax revenue from such high tariffs, China would likely be the winner of a trade war, as they could, with relative ease, send their exports to other countries while US companies would struggle to find alternative sources of imports.