Alibaba’s rise to become one of the biggest internet firms in the world has been nothing less than meteoric, a growth trend that is correlated to a degree with the rise of Amazon, a company that Alibaba is frequently compared to.  Founded in 1999, Alibaba is a wide ranging conglomerate that provides consumer-to-consumer, business-to-consumer, and business-to-business sales services via web portals.  It also provides services in electronic payments, shopping search engines, and data-centric cloud computing.  Their E Commerce wing is the strongest section of their conglomerate, with main divisions including Taobao (most popular C2C website in the world), TMall (Alibaba’s B2C platform- competes with Amazon), and their cloud services (second largest in China).  As of April 2016, it is the world’s largest retailer surpassing even Walmart with operations in over 190 countries.  The numbers speak for themselves in Alibaba’s retail dominance, as they generate more revenue than Amazon/Ebay combined, with online sales/profits surpassing all US retailers (Walmart, Amazon, eBay) combined (Forbes).  80-85% f al E-commerce transactions in China are from Alibaba!

Jack Ma, their CEO, is one of the most respected individuals in China and is credited with fostering entrepreneurial ambitions among the country’s youth.  Pursuant of Jack Ma’s philosophy, Alibaba upholds a reputation in consumer friendliness among their products.  Reflective of their trust with the Chinese public, Alibaba’s Taobao is considered an intricate part of people’s daily lives, with many consumers trusting Taobao for loans rather than government banks/SOE’s.  This trust is seen in the number of users, as Alibaba’s China retail marketplaces boast some 440 million active users shopping the virtual stores of millions of businesses (no other platform comes close in scale).  It is because of this positive conception with the Chinese public that allows Alibaba to see major gains during Singles’ Day, a popular Chinese holiday among the younger demographics which celebrates being single.  Singles’ Day has become the largest online shopping day in the world, and a way of life.  in 2016, Alibaba passed $14B in revenue on Singles’ Day, more than double the $5.8 billion in sales of the combined U.S. e-commerce holidays of Black Friday and Cyber Monday.  Similar to Amazon’s popularity with millennials, Alibaba hopes to continue to build their trust with Chinese millennials, a demographic that accounts for 58% of all internet users in a country with the world’s biggest e-commerce market at $672 billion in 2015 (McKinsey & Co.).  Their spending power is crucial to many businesses on Alibaba’s platform, and this group will be set to drive future 11.11 spending.

Going forward, the company’s growth projection looks strong based on their recent e-commerce quarter performance driven by 11/11 promotions.  Their online marketing services and commission revenues showed better growth Y/Y, and their search advertisement revenue for China retail business is likely to grow 50% Y/Y (32% M/M growth).  The Y/Y growth is mainly driven by the growth of click volume, in which the average cost per click was flat Y/Y.   Tmall GMV grew 32% Y/Y in October 2016, and high growth will continue partially due to the low base in October 2015 and partially due to the early promotions of 1/11 sales events.  With mobility such a crucial aspect of today’s society, Alibaba’s Tmall mobile adoption continues to grow faster.  There were 138M incremental downloads of Mobile Taobao and 92M incremental downloads of Mobile Tmall from 1012/2016 to 11/128/2016.  The ranking of Taobao’s iOS App went up from 17 in September to 9.8 in October 2016.

Ultimately, Alibaba is guided by a strong CEO that recognizes adaptability methods to changing consumers and society, and is willing to continue to further internet penetration not only in China but also the rest of the world.  Ma’s statements for major expansions worldwide echoes the company’s commitment to growth. 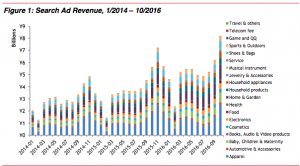 What Everyone Should Know about Alibaba – Quora

Alibab’s Singles’ Day: What do we Know About the World’s Biggest Shopping Event.  https://www.forbes.com/sites/franklavin/2016/11/06/alibabas-singles-day-what-we-know-about-the-worlds-biggest-shopping-event/#13867a506da7

16 Responses to Alibaba, a Brief Overview and Singles Day Performance (11/11)