Since President Trump’s inauguration in January of this year, the DOW Jones industrial average, the most basic metric for watching the American stock market, has increase by about 5%. Just a few weeks ago, the average broke 21,000, signaling an all-time high. While financial experts were initially worried by what a Trump presidency would do to the American economy, the earliest signs have been positive, despite a short lived downturn after the failure of the American Health Care Act.

Turning to China, the story has been very different. In the first few months of the Trump Presidency, the Chinese markets have taken a sharp downturn. The Shanghai Composite Index, a similar metric for the Chinese exchange, has fallen about 5.2% since peaking shortly after the election. While uncertainty in the Chinese manufacturing sector is partly to blame, experts in Asian markets both in the US and in China also cite Trump’s tough talk on trade as a potential cause for the downturn.  Trump has repeatedly discussed a desire to level the playing field and crack down on alleged unfair dealings by the Chinese government. Similar effects have been seen in Mexico, though not as pronounced. Manufacturers, particularly those on the unsophisticated side as described by Hessler in his travels do not totally understand the political reality of Trump’s campaign positions and perhaps overreact by predicting a greater effect. Much of this rhetoric has been incredibly vague using words like “cheaters” and “play fair.” While it’s easy to infer by the downturn that investors fear rash action on this rhetoric, what exactly can Trump do? What do Chinese manufacturers have to fear?

An all-out trade war would appear to be the worst case scenario, however even the most pessimistic Chinese investor sees this as unlikely. A more likely outcome of this tough talk is smaller actions that subtly cut into the profit margins of Chinese businesses. A previous post discussed the likelihood of tariffs on Chinese imports. During the campaign, Trump talked up the notion of a 45% tariff on imports to “level the playing field.” Though this figure itself is not totally feasible, it has terrified Chinese companies with heavy reliance on exports, injecting uncertainty into the markets.  Domestically, we know that campaign promises of this magnitude often are just talk never turned to action, however individual Chinese firms are less certain. 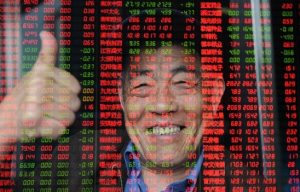 Lastly, and a little more far-fetched, the instability in the market could also be a function of perceived military threat from the United States. While, again, all-out war is unlikely, the Trump administration talking tough on actions on the South China sea and a relationship with North Korea that appears far too cozy, is enough to make Chinese industry squirm just enough to instill more uncertainty in the markets. Overall, it’ll be interesting to continue to watch the Chinese markets throughout the Trump Presidency.  Will they continue to react to rhetoric alone? Will this further the recent downturn?