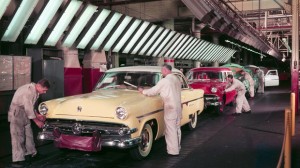 Ford is doing its best to take advantage if the surging wealth in the Chinese economy right now.  For this first time in their history, they are currently producing more cars in Asia than in Europe.  Morgan Stanley said in a report this month that it values Ford’s Chinese operation at $15 billion, which is more than a fifth of Ford’s stock market value.  They are comparing what is going on with the automotive industry in China to what happened a century ago when Ford released the Model T because Chinese families are finally starting to desire their own transportation.

In his first half year at the helm, Ford CEO Alan Mulally increased Ford’s market share in the Asia-Pacific region from 2.3 to 3.3%.   This is crucial because Ford has had to spend nearly $5 billion to catch up to companies ahead of them in the game, such as General Motors.

Ford is expecting to profit from operations in Asia this year, after losing around $77 million last year.  However, Ford recorded record sales in North America last year.  Though Ford has clearly been successful in North America, investors have been skeptical that they are not taking advantage of opportunities on other continents, but they are making a massive effort to get on the map.

Ford is smart to make its move on the Asian market during a time where wealth is growing so rapidly.  The key to success is staying one step ahead of the pack, and Ford is trying to repeat the success story they had a hundred years ago.  Fortunately, their move to Asia-Pacific has not limited growth or production in North America at all.  Rather than having a trade-off situation, it is becoming just an added bonus to the success that is already coming in their home market.