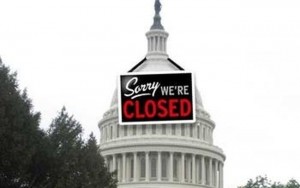 Obviously the U.S. government’s shutdown is causing tension and concern across the globe. It’s a rare and momentous event. While it may seem drastic, a Xinhua writer presents an argument for “de-Americanizing” the world.Note 1 Could this shutdown be the beginning of a huge shift in world culture? The article’s author comments,

“Instead of honoring its duties as a responsible leading power, a self-serving Washington has abused its superpower status and introduced even more chaos into the world by shifting financial risks overseas, instigating regional tensions amid territorial disputes, and fighting unwarranted wars under the cover of outright lies.”1

These are aggressive allegations. However, the Wall Street Journal points out that the Chinese are yet to oppose American involvement in getting their students into Harvard, handing them profits via Iron Man movies, etc.2 A huge chunk of China’s $3.66 trillion of foreign-exchange reserves are in U.S. dollars. Are they really considering dropping that by any significant margin? Ultimately the article’s author just wants the United States to play a more constructive role in the world’s issues. It simply chose a “pax-Americana” stance to illustrate its point.

One Response to Do the Chinese want to Sell Short…America?