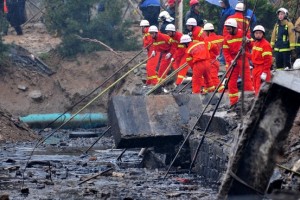 A recent pipeline explosion in Qingdao left over 50 dead, with 136 injured and nine people still missing.  Regulators and the pipeline’s operator have been passing the blame back and forth since the accident.  Authorities have reported that the explosion was caused by severe human error and a dereliction of duty.

Yang Dongliang, director of State Administration of Work Safety, cited “negligence of duty of pipeline supervision and unprofessional handling of oil leakage before the blasts” as the main problem.  However, the company Sinopec Group defended its conduct, stating authorities in another city with oversight over the pipeline never signed off on an overhaul.  For this reason, the investigation is still not complete.

Qingdao’s rapid urbanization illustrates the challenges that Chinese govnerment face in planning for economic growth.  The population of Qingdao alone jumped nearly 2.2 million in 24 years.  The safety of this influx in population is at question, however.

“I wonder why so many factories and companies have been built in the area, and why people are being directly exposed to pollution and explosions,” said a Huangdao resident calling herself Xiao Rou on her microblog. “Why doesn’t the government take measures?…I hope the government can give us a safe home.”

Sinopec Group and other companies have faced protests to build or expand their industrial facilities in highly populated areas in the past.  Just in this past year, residents of the small city of Ningbo forced officials to suspend their $9 billion expansion of a petrochemical facility.

The explosion just last week occurred while workers were trying to clear a spill from an oil leak that began in the early hours of the day.  Apparently, Sinopec tried to submit plans to overhaul aging parts of the pipeline, but their efforts were rejected.  “If there were any incidents, we wouldn’t be able to repair our pipelines conveniently and immediately,” the Sinopec representative said. However, “the [Weifang] government didn’t agree with our plans to repair the aging pipeline, so we couldn’t do it.”

This event marked the deadliest pipeline blast in recent memory.  As China continues to push towards urbanization and industrialization, ethics will come more and more into play with the planning of these types of pipelines near densely populated areas, and Chinese governments will face difficult decisions on whether or not to proceed with some of their industrial facility expansions.