Here I discuss the end of China’s one-child policy. In my weekly WREL economics segment I also discussed , the auto industry in China, Yellen and the Donald and interest rates, and gave an update on the United Way of Rockbridge. I provide only a paragraph one each at the end.

This past week China announced the end of its policy that limited most families to one child. Now it never was a strict limit, rural residents could have a second child if the first was a girl, and minorities were exempt altogether. But when it was first implemented in 1980, most women still wanted more than the permitted number, and the policy was draconian, indeed horrific, with women dragged away to undergo forced abortions and (slightly less horrific) forced sterilizations.

In the background, the formation of the People’s Republic in October 1949 brought an end to a century of almost continual civil war, including the Taiping Rebellion in the 1860s that led to perhaps 25 million deaths. The impact of the Japanese occupation in World War II was also horrific, in large part because it disrupted agriculture in the most productive parts of the country. So with peace after 1950, couples were both willing and able to raise children, and population growth rose. Fearing nuclear war with the Soviet Union, in the 1960s Chairman Mao actually encouraged large families. The problem was food. By the 1970s, the industrialization policies under Mao led to a sharp rise in fertilizer output, and pesticides and herbicides too, as the chemical industries expanded. Enter the Green Revolution, with “dwarf” varieties of rice and wheat that wouldn’t grow tall and flop over when fertilizer was used. So in the 1970s the population ate a lot better, but the new leadership feared that was a one-time increase that would be eaten up over time. Hence fertility restrictions.

In fact agricultural productivity kept improving. Today the public health challenge isn’t dealing with undernourished children, it’s dealing with the consequence of too much food, obesity and diabetes. Now environmental issues are affecting grain yields, but famine is no longer a realistic worry. Oh, and while the popular view attributes agricultural improvement to the breakup of the communes and the restoration of family farming, yields began growing well in advance of such institutional changes. It’s not that the “Household Responsibility System” that gave land to the tillers didn’t matter. But it mattered because it allowed families to send their children to the cities to work, and to shift their attentions from growing corn, wheat and rice to vegetables, pigs and fish farming.

But was this policy effective? In the early 1980s it certainly was, and it remains wildly unpopular today. Ending it, though, is now irrelevant, because on average women don’t want large families. Most of the population now lives in cities – those who remain in the countryside tend to be old – so children are no longer useful as farm labor. Plus farmers now have better tools, herbicides take care of weeding and threshers handle the harvest. Compulsory education also means families have to support children for a longer period than in the past, and if parents want their children to do well they need more than the minimum education. With the growth of financial markets, it’s now possible for families to save for their old age by putting money in the bank – Chinese save a lot, 25% or more of income. Even in the face financial scams and pyramid schemes, that’s more reliable than depending on a single child who might turn out to be a prodigal daughter who only looks after her in-laws. Of course many couples want children, the social and biological impulse remains. But overall the benefits of having children are lower.

Meanwhile, the cost of children has risen. Women not only work off-farm jobs, but over time the past 25 years those jobs paid better and better wages. Having children means lost income, unlike when a wife could combine farmwork and child rearing. Furthermore, education is universally viewed as important. Even though compulsory education is now free, that’s not enough to do well, and education doesn’t come cheap, at least relative to incomes. Likewise healthcare is more costly, and with higher incomes overall, kids want fashionable clothes, not hand-me-downs. So the costs of children are up, indeed up a lot. 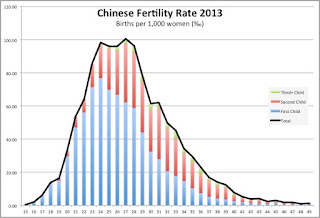 So with lower benefits and higher costs, Chinese families don’t want two kids. This isn’t just hypothetical. Fertility was falling sharply even before 1980, and was below the magic “two” number in urban areas as early as 1970. Demographers have examined the behavior of individuals for whom the policy wasn’t binding, who were allowed to have more children. Many don’t, the evidence is pretty clear that on average families want fewer than two children. So from the perspective of population growth, ending the one-child policy is a cheap shot. But there are plenty of couples who want two or more children, and for them this is a really good change, even if for China as a whole the policy no longer matters. 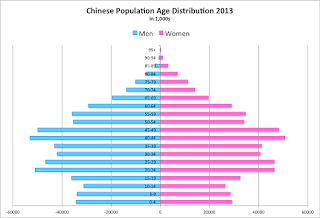 Now with smaller family sizes from 1980, the number of young women today has also fallen. Meanwhile, longevity has increased and with better nutrition and access to clean (bottled!) water that is set to continue. The biggest age bracket in the population are those in their late 40s. Already the working age population is falling, and by the early 2020s the overall population in China will be in decline even as the number of elderly is rising. That’s today’s worry, that the number of workers per retiree is set to fall sharply.

The policy change is however too late to make a difference. Even if today’s young women start popping babies at double the rate of their mothers, there just aren’t enough young women for that to have a big impact. It would be only when those new babies in turn become mothers (and their brothers workers) that the ratio of 20-64 year olds to those 65 and above will start improving. I’ve run simulations: that won’t happen until 2063, a full half-century from now.

For my simulations, I used the age distribution of women in 2013 (see the population pyramid above), the age-specific fertility rate for women for 2013 [both from the China Statistical Yearbook 2014, and mortality from the WHO life tables, which matters for the old-age portion of the projections. I held fertility for young women (20-24) at a 50% increase, given the ongoing increase in education and work, but let that for the next two brackets (age 25-29 and age 30-34) double. I did not put in the likely decrease in mortality at older ages. Note that a 50% change in fertility in the space of 5 years represents a very fast pace of social change; doubling is even less realistic. My intent however is not to be realistic, but to ask how big and how soon the impact would be IF women start popping babies left and right. The asnwer: not much. There are a few more young Chinese in 2043, but a lot more old Chinese. Only in 2063 does the number of young Chinese rise enough to offset the aging of the population, and then it’s not by a lot.

Non-China material deleted. Go to Autos and Economics for the full post.